Home > They made history> Eames Lounge Armchair
Are you an Amazon customer? Pay now with address and payment details stored in your Amazon account.

Charles Eames was an iconic figure in the world of design. The importance of his numerous works has been recognised since the 1950s.

Everything you need to know:

Charles Ormond Eames, Jr, more commonly known simply as Charles Eames, is considered a genius designer, architect and filmmaker. An American, he was born in Missouri in 1907 and briefly studied architecture at the University of Washington in St. Louis, leaving after two years. He resumed his studies at the Cranbrook Academy of Arts in Michigan after being invited by the Finnish architect Eliel Saarinen. As well as swiftly becoming their Professor of Industrial Design, this was where he met his future wife, the painting student Ray Kaiser. Together they designed multiple products in architecture, furniture and photography.

Eames developed numerous different pieces of furniture. However, the Lounge Armchair remains one of his biggest successes. It was designed in 1956 to be as warm and comfortable as a worn baseball glove. There are two elements to the product, an armchair and a footrest. Leather covers the glossy, wooden structure. There is a massive support to keep it fixed to the ground whilst the back is soft enough to comfortably lean against. 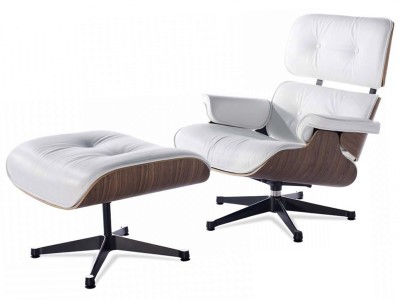 The Eames Lounge Armchair became a furniture classic because of the originality, creativity and comfort that Charles Eames integrated into its ergonomic design. It is now regarded as iconic. This armchair comes in two colours and can be found on specialised sites.