Home > They made history> Modern Graphic Lamps: Norm 03 - Small and Norm 03 - Steel
Are you an Amazon customer? Pay now with address and payment details stored in your Amazon account.

Britt Kornum qualified as a designer at the Aarhus School of Architecture in Denmark.

Her work highlights a mix of feminity and modernism. She is especially inspired by harmless events and organic forms, which she uses to bring a personal and original touch to her designs. According to her, the creation of a perfect item comes only with a combination of both technical knowledge and creative spirit. Using this perspective, the designer spent two years studying paper and its effect on light before creating her paper lamp. With her unique style, Kornum built herself an excellent reputation and successful career.

The Norm 03 Small Lamp and Norm 03 Steel Lamp are some of Britt Kornum's most well known works. When they are hung from the ceiling and switched on, the lamps reveal a sculpted light throughout the room. They have a wavy construction with small strips of paper crossed across them. These graphic, modern designs were launched on the market by Nomann Copenhagen and have sold very well. In 2004, the IMM (International Furniture Fair) of Cologne named them best item, just a year after they won the Formland Prize.

Norm 03 Lamp, for a better atmosphere at home: 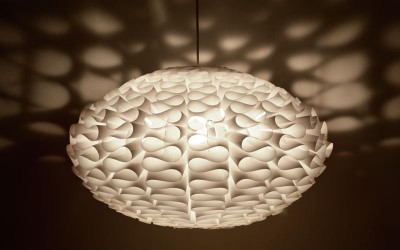 This creation of Britt Kornum brings a touch of modernity to any lounge or hall without losing the vintage atmosphere. When switched on, the delicate air brings a sense of well-being and reassurance to the owner. It brings style and originality to the inside of your home.