Home > They made history> SAS Royal Hotel
Are you an Amazon customer? Pay now with address and payment details stored in your Amazon account.

Arne Jacobsen left a clear mark in the history of design and architecture. The father of organic modernism, he is responsible for many revolutionary works.

Arne Jacobsen was born in Copenhagen in 1902. He began his career as a mason before studying architecture at the Royal Danish Academy of Fine Arts. After being awarded a diploma, he went to work at Paul Holsøe's architecture office. In 1930, Jacobsen created his own business to specialise in the design of furniture and buildings. The building of the Bellavista residential development in a suburb of his hometown helped his international reputation grow. 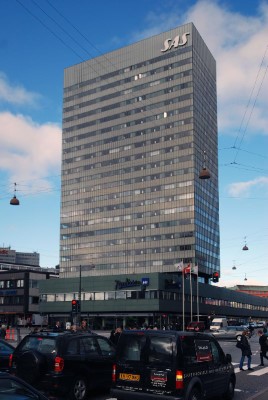 Arne Jacobsen is recognised for meticulousness across his works. Every stylistic detail of furnishing and lighting in every fitted room is immaculate. The Radisson SAS Royal Hotel, one of his architectural creations, is no exception. This building can be found outside Central Station in Copenhagen, next to the amusement park known as Tivoli Gardens. A concrete and glass structure completes the building. Inside there are twenty floors that include a lobby, café and restaurant as well as accommodation.

The Radisson SAS Royal Hotel shows the modernism and perfectionism in Arne Jacobsen's style. This building helped Jacobsen's reputation grow on both the national and international level. He put all his knowledge and skill into developing both the inside and outside of the hotel.

This work contributed to a much wider appreciation of Scandanavian design.