Home > They made history> KITE Clock
Are you an Amazon customer? Pay now with address and payment details stored in your Amazon account.

George Nelson was an original American designer known for his novel ideas. Though he studied at Yale, he was mostly self-taught. As with Le Corbusier, he preferred to draw upon diverse combinations and experiences when shaping his own style. He was one of, if not the most successful American designer of the 1950s. Besides furniture, he also made decorative items such as the KITE clock; a wall clock with a highly original design. 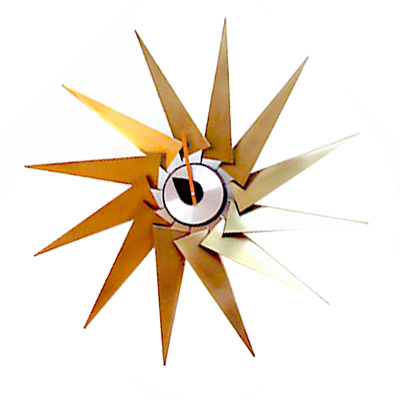 The KITE Clock was created in the 1960 by the talented George Nelson. It has a very particular design that mixes modernism and rationalism. There are many geometrical shapes, including the diamond and octagon among others, that can be found in the clock. Nelson mainly used a combination of wood, bamboo and aluminium for the spikes that represent the numbers. Thanks to digital technology, it works well in the present day and the components make it very light. 1950's styles are highlighted by its bright and easy legibility. Children tend to find it particularly delightful. Different colours and motifs have been used to diversify the brand, including one shape that is formed of the two halves of a diamond. The black half of the diamond represents night and the white represents day. Exclusive stores such as Artdeco market this product.

The Kite Clock is a unique item that shows the talent of George Nelson.