Home > They made history> Bibendum Armchair
Are you an Amazon customer? Pay now with address and payment details stored in your Amazon account.

Eileen Gray was an Irish artist who worked with lacquer in design and in architecture. Born in 1878, she was educated at the Slade School of Fine Art in London. She died in 1976. Originally specialising in lacquer, she later moved to design and the Bibendum Armchair of 1929 became one of her most famous pieces. It was originally created at Suzanne Talbot's individual request, but soon became popular with the wider public. 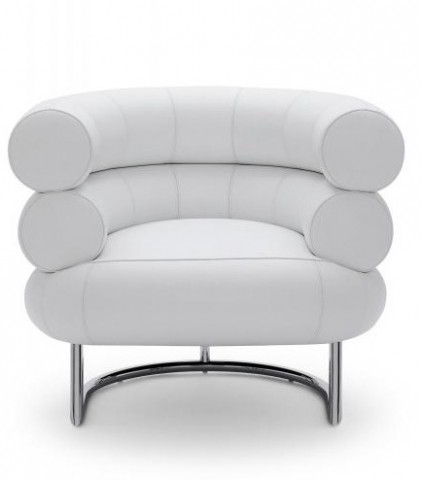 The Bibendum Armchair is a unique piece of art. Guarding this timeless design has always been the first concern, because it is one of the rare items to have not been modified since it was conceived, back in 1929. Its original concept remains intact, and the only colours available are still black, brown and white. Other than the quality of the leather, nothing has changed. With two leather tubes stacked in semicircles on the main cushion, this piece of furniture brings to mind the famous Michelin Man and his rounded form, which provided an inspiration for the product and its name. Regardless of its origin, this armchair offers maximum comfort. Still produced by companies including Artdeco, ItaliaDesigns and similar, it is available in select stores.

The Bibendum Armchair is a classic of the design world and an icon of the 20th Century.