Home > They made history> Eames DAW Chair
Are you an Amazon customer? Pay now with address and payment details stored in your Amazon account.

Charles Ormond Eames, Junior (1907-1978), known as Charles Eames, was an American designer, architect and filmmaker. His creations left a huge mark on the 20th Century, particularly through the chairs he designed and produced with the Vitra and Herman Miller companies.

After studying architecture for two years at the University of Washington in St Louis, Missouri, Eames visited Europe and discovered the works of Ludwig Mies van der Rohe and Le Corbusier. On his return, he opened his own architecture firm in his home town. He collaborated with the internationally famous Finnish architect Eliel Saarinen, who invited him to study architecture at the Cranbrook Academy of Art in Michigan. Whilst at Cranbrook, Eames became a professor of industrial design and met his future wife, the painting student Ray Kaiser. Together, they settled in California where they produced numerous new ideas in art, design, architecture and furniture. They had a particular focus on molding and bending of wood, techniques that they experimented with when creating chairs, splints and stretchers for the American Navy during the Second World War. The chairs and armchairs they designed more than sixty years ago are still in use and still stylish today.

The DAW Chair: simplicity and elegance: 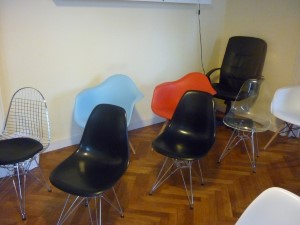 Charles and Ray Eames' DAW Chair (Dining Height Armchair with Wooden Base) revolutionised furniture in the 1950s with its unique style and grace. The seat follows the shape of the body to make it more comfortable and the wooden legs are strengthened with steel. Elegant, comfortable and strong, this chair is perfect for your lounge or office.